1. The Higurashi When They Cry Series 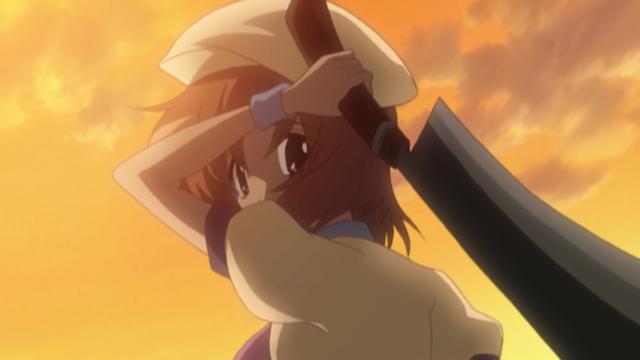 For those who have patience — and maybe want to skip out on the doilies and chocolates this year — here is a horrifying alternative. The Higurashi When They Cry series is comprised of multiple, Japanese sound novels produced by 07th Expansion, and has lent itself to the horror and VN community for years. The main characters are often young children and adults who are either living in the mysterious town of Hinamizawa or visiting it for the Watanagashi festival (Cotton Drifting Festival). Every year since the halting of a massive dam construction, two victims are either sacrificed or “demoned away” to appease the town’s angry god, Oyashiro-sama — but are these people really being taken by some supernatural force? Could it be some deranged psychopath who’s making people fall off cliffs, bludgeoning them to death, and burning them (possibly alive) inside of massive oil drums? These are questions the Higurashi chapters ask and eventually answer, should the reader stick around. Additionally, there is a lot of love and loss, as well as hate and genuine fear among the children who reside in Hinamizawa. There are multiple stories to be told (alongside an often amazing soundtrack) and the first chapter, Onikakushi, is definitely worth a read. All available chapters can be purchased in English via Steam. There might even be in a new anime adaptation in the coming years, and that in and of itself is extremely exciting! – S.N. Valadez

My new favorite Youtube channel is CharactersWelcome UCB. Based in New York City, this lovely bunch of comedic actors perform short, single-person skits that range from a young man encountering his childhood bully to two sentient trenchcoats pretending to be a human child. And they work because they go for it: Each story fully runs the gambit on what you can do with such a story. Two trenchcoats want to go see the Paddington Bear movie because they heard there’s a good raincoat in it? Alright, that’s what this skit is going to be about. These skits, because they are usually performed only by one person, do not have time to waste on how the trenchcoats gained sentience and learned to manipulate a child’s organs. The skit doesn’t even include the person the trenchcoats are talking to. What is that ticket-teller thinking? Who knows! We have what is important to this scene, and the reaction is left fully up to the viewer. In fact, it lets the viewer become even more engaged because we become the ticket teller. With only one side of the conversation, we must fill in the blanks — the face of the ticket teller as this puppeted child comes along, the decision of whether or not the ticket is actually sold. Which, in turn, becomes part of the humor. Together, it shows that even the weirdest concepts can absolutely be pulled off well. – Becca Calloway

This story-heavy RP game podcast just began its fourth season, and I’m obsessed. Storyteller Jason Carl uses the game system Vampire: The Masquerade to lead LA By Night’s extensive cast of players — most notably Erika Ishii and B. Dave Walters — unfold a story rife with politics, centuries-old feuds, and blood set among the nighttime streets of Los Angeles. Unlike other systems, Vampire: The Masquerade focuses on choice, role play, and lore developed within the game, so episodes play out as extended character dramas, with an emphasis on each character’s emotional stakes within the world. If you’re like me and grew up in the Vampire Boom of the ’90s and ’00s, you owe it to yourself to seek out some of the best vampire storytelling on the internet right now. LA By Night airs Fridays at 8 p.m. on the World of Darkness Twitch channel, with VODs available on the World of Darkness Youtube channel. Previous seasons can be found on Geek & Sundry’s Youtube channel. – Daniel Mazzacane